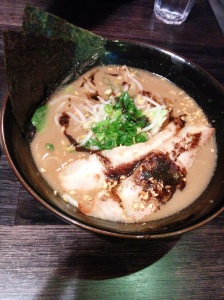 I turned my back on this place too soon! Seriously, it’s a great broth (still don’t like the gritty mouthfeel) but the flavour is there. 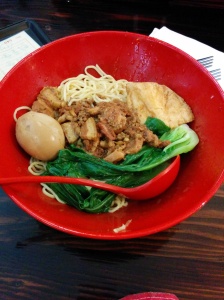 It was pretty tasty! The pork was very sweet and the serve of noodles was generous. The egg had plenty of flavour. It wasn’t earth shattering but it was a nice meal. I’d say the percentage is a little low on Urbanspoon but it’s also the sort of place that served bain-marie fare and that doesn’t usually bode so well.

Miracle Asian Supermarket sits between Coles and BreadTop on the Lower Ground level of World Square.

This bowl of bibimbap cost me $6.50, which is definitely reasonable for a meal which left me comfortably full. I enjoyed it, although I found the warm and cold parts of the dish were a little weird together. I love the chili sauce served with this dish!

Once upon a time, in a city called Adelaide, far away to the south, I had my first bowl of ramen. In those days, ramen was hard to come by in Adelaide. So I had to settle for a chain store called Ajisen Ramen, and I really didn’t mind it.

It’s a few years later, and my Sydney ramen journey has finally brought me to the Ajisen Ramen store in World Square. I can’t compare my Adelaide experiences to the bowls of ramen I’ve had in Sydney, because I had no benchmark at the time and I don’t really remember anything except I quite liked it.

Enter Ajisen Ramen, World Square. I ordered the ramen with ribs, chashu and karaage, as I wanted to try all the meat on offer and I was feeling a little peckish. 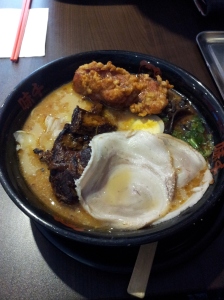 It came with a hard boiled half egg and some of those nice mushrooms, as well as cabbage which helped the pork ribs stay out of the liquid. To my hungry belly, the first sips of soup tasted wonderful. I really do think that the top layer of this ramen was quite respectable. Very thin liquid, but a nice taste of garlic and other flavours and not the boring, unitarian pork flavour of Tenkomori. The chashu was middle of the road, the karaage was nice and crispy and juicy, and the parts of the ribs which weren’t burnt to a state of unhappiness had a nice flavour. Underneath this fun layer, though, things got a little bland.

Overall, this bowl exceeded Tenkomori’s quality but was still not up there with the better bowls of ramen I’ve tried on my adventure. I have plans to cut the worst places from my list and revisit all of the ramen establishments I enjoyed to provide (hopefully) a numbered, fairly definitive list of ramen establishments. Ajisen will not feature on that list.